The Board of Directors

The Board of Directors

The AFO is led by a Board of Directors. The board has 11 members, including:

5 representatives for each of the five regions of Ontario;

1 representative for the identity group “Elderly and Retired”;

1 representative from the identity group “Women”;

1 representative from the identity group “Youth”;

2 representatives from the Francophone Racial and Ethnocultural Minorities (FREM) community. 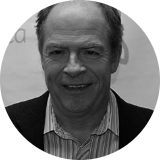 Carol Jolin first became involved with the Francophonie of Ontario in 1983 when he became a language instructor. The next year, he received a teaching position with the Niagara South Board of Education. This was the beginning of a 31-year career that came to an end in June 2016. Over the course of his career, he has lived in Welland, Toronto, Barrie and Ottawa, where he currently lives.

As an active member of the Association des enseignantes et des enseignants franco-ontariens (AEFO) since 1992, Jolin was the local director of the Catholic School Board Central East in Ottawa before serving as the provincial director from 2012 to 2016. He sat on several administrative councils, including the AEFO, the Ontario Teachers’ Federation (OTF) and the Canadian Teachers’ Federation (CTF). On the local level, he served on the Board of Directors for the French language radio station CJFO (now called Unique FM) for five years, as well as for the Assemblée de la francophonie de l’Ontario (AFO) for two years.

The AEFO’s double mandate of union representation and French language promotion allowed him to be actively engaged in various projects of the Francophonie in Ontario. He traveled extensively in the province, and developed an awareness of the different realities and challenges faced by francophones in Ontario. Carol Jolin has been the President of the Assemblée de la francophonie de l’Ontario since Oct. 30, 2016. 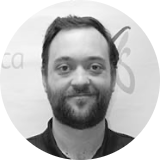 Alexi Breton now has over six years of experience in building professional relationships in education, recruitment, liaison and sales. He is passionate about serving the Francophone community and began his position at the Ontario Cooperation Council in September 2017 after working at Collège Boréal. Throughout his professional career he was responsible for delivering school presentations from Parry Sound to Kirkland Lake to Thunder Bay and every municipality in between. Even though he is a Northerner, this was his first opportunity to visit many of these smaller Northern Ontario communities. 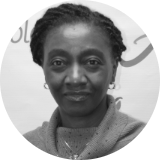 With a doctorate in Electronics from the Université de Valenciennes in France, Dr. Blandine Lesage arrived in Canada in 1996 and worked for 13 years at Nortel Networks as a software development engineer. A humanist, in 2009, she created an international solidarity association in France which sought to improve the living conditions of populations in Cameroon’s rural areas.

Blandine contributes to the influence of the Francophonie in Southwestern Ontario where she has lived for over 20 years. She is also actively involved in Francophone and Anglophone communities with different groups including seniors, women, youth, ethnocultural minorities, and in various fields such as teaching, mentoring, leadership of women and girls, and identity promotion.

She shares her time and skills with many Francophone and Anglophone organizations, and has served on several boards of directors as well as working groups such as Entité 1, ACFO WECK and HDGH Accessibility workgroup.

Her extensive knowledge of the region, her involvement at all levels in the community and her passion for human development make Blandine a valuable asset for the expansion and dynamism of the Francophonie in Southwestern Ontario. 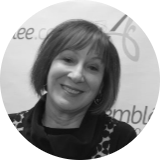 Originally from North Bay’s Francophone community, Claudette Gleeson moved to Thunder Bay where she became head coordinator of the « Maman et moi » group, an organization for children under the age of four and their parents that promotes playing games in French. Afterwards, she became vice-president of the Association des Parents d’Élèves (APE) at her daughter’s school. Her effective leadership skills and boundless enthusiasm ensured the success of many projects with the support of the school’s Francophone and Anglophone parents.

Her efforts moved towards politics and activism when she became a school board trustee in 1997 and vice-chair of the board in 2009. In her role as president of the Accueil francophone of Thunder Bay in 2000 and as vice-president of the Francophone Advisory Committee of the Northern Ontario School of Medicine since 2006, she works to ensure that Francophones have access to health care services. Her advocacy in this area led her to deepen her involvement in politics by joining the board of directors of the Ontario Cooperation Council and becoming vice-president of the Association des francophones du Nord-Ouest de l’Ontario (AFNOO) in 2012. 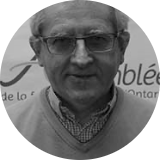 Dominique Janssens and his wife Arlene have lived on the territory of the Conseil scolaire catholique MonAvenir for over 24 years. Mr. Janssens is proud of his two children and his grandson. A civil engineer by academic training, Mr. Janssens has worked for most of his professional career in the lumber and civil engineering industries, from east to west Canada.

Since 2009, Mr. Janssens has rather focused his professional interests on community work in the Greater Toronto Area. Mr. Janssens has served as Catholic School Trustee since 2009, and has held several positions at the Council table, including that of Vice President, Chair of the Work Committee, School Facilities and other committees. Since then, he has also found an interest in francophone associations, first as a coordinator and then as a volunteer administrator. He served for six years on the board of directors of a French language health services planning entity and is currently a member of the board of a young community association serving Francophones in the Halton region.

Civil engineer of constructions, (graduate of the Université Catholique de Louvain in Louvain-la-Neuve), he is always ready to improve his professional, general and cultural knowledge.

Of Belgian origin, and adopted Canadian, bilingual (French/English) he also understands Spanish and Flemish. Amateur of classical music and philatelist for the pleasure of collecting stamps, he is also interested in astronomy and the natural world. 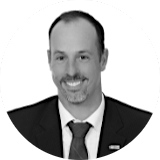 Jason Dupuis was born and raised in Ottawa in the Orleans area. With family in Alexandria, Cornwall and now Hawkesbury, Jason knows Eastern Ontario well. During his youth, he gleaned the importance of Francophones in Ontario by witnessing and participating in movements for the creation of post-secondary institutes and by fighting for the survival of the Montfort Hospital. Following his time at Garneau High School, Jason graduated from the University of Ottawa before beginning his teaching career at the CEPEO. After ten years, he moved to the CECCE to pursue his career as Deputy Director, Director and now as Superintendent of Education. His experience in education, which spans more than 20 years, has enabled him to grasp the reality and the challenges affecting Francophone communities in Ontario.

Recipient of the prestigious Canada’s Outstanding Principal Award in 2015, this honour was bestowed upon him for his many accomplishments and contributions in education. He also received the Honor and Merit from the CECCE in recognition for his leadership in education, his commitment to the community, his concern for the well-being of students and the community, his efforts to develop the Francophone cultural identity in the student, the integration of technology in the classroom as well as for his skills in staff mobilization. 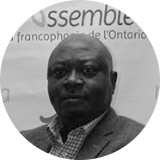 Born in the Democratic Republic of the Congo, David Mbaya Kabamba studied health sciences in Congo and social work at Laurentian University in Sudbury.

He also has training in various areas of governance, personal development, motivation and policy development.

In Congo, he worked in the field of project management and community development while in Canada, he has worked in the area of ​​immigration and the settlement of new immigrants. Currently, he works as a mental health social worker at the Conseil scolaire catholique MonAvenir.

Having obtained a master’s degree in sociology from the University of Ottawa, Denise Lemire has carried out and directed a multitude of research projects in the fields of health, social services and education. Denise has worked in the Francophonie for 40 years as researcher, consultant, president of organizations, member of boards of directors and active community volunteer. During the last few years, Denise has assumed the management of grants for organizations and artists.

Denise is in her third year on the Board of Directors of the Canadian Network for the Prevention of Elder Abuse, where she brings her expertise in the Francophonie. She is part of the Core Management Team of a five-year project on intimate partner and family violence screening and intervention tools: adequacy, access and impact for older women (65 and over). She recently sat on the Advisory Committee for a serious game to counter bullying in seniors’ residences (Cégep de Drummondville and other partners). She is continuing on the Advisory Committee for another serious game to prevent and counter mistreatment of lesbian, gay, bisexual and trans (LGBT+) seniors in residences.

Denise is the mother of Martin Laporte, known for his role in Improtéine, as well as the grandmother of three grandchildren. 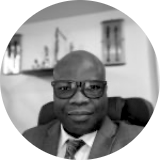 Luc Bonaventure Amoussou is the current regional head of Collège Boréal in Hamilton. He holds a doctorate in political and religious science from the University of Toronto, and is passionate about post-secondary and university education. He has also taught French linguistics courses in the French Studies department at York University and Glendon Campus, and political and religious science courses at the College of Holy Cross (Worcester, MA). Passionate about the French language and the Francophonie, he recognizes the unique and specific value of French, which he masters perfectly along with several other international languages. He believes in the plural Francophonie and in the richness of linguistic diversity.

As regional head of Collège Boréal, he fights for the recognition and promotion of the Ontario Francophonie and believes that the French language must have its place of honour in the province’s linguistic mosaic. The Ontario Francophonie is more than a single route. It is a multitude of Franco-Ontarians with a large participation of Francophones from elsewhere that enriches our society.

Luc’s motto is to always go forward and dare to do great things for humanity. He firmly believes in the future of the French language and admires the collaboration and harmony in linguistic diversity, a source of immense wealth. 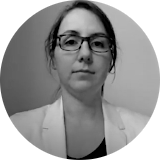 Originally from Kingston, Michelle Nadeau currently lives in Ottawa where she pursued her post-secondary studies in commerce with a specialization in management. Today she is a CPA, CMA certified accountant and works for the National Defence in financial valuation.

Michelle has been involved with the Franco-Ontarian youth through her role on the board of directors of the FESFO since 2014. She has also been a facilitator during community consultations for the creation of the Francophone University of Ontario project. 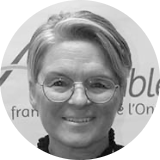 Nicole Fortier Levesque was born in Hearst. She is the wife of Yves Levesque, mother of three sons: Pascal, Sylvain and Sébastien, and grandmother of six grandchildren: Félix, Adèle, Zoé, Léa, Janie and Calem.

PROFESSION: Worked in the field of education from 1987-2019 as a teacher at the Conseil scolaire catholique de district des Grandes Rivières, pedagogical advisor and team leader at the Ministry of Education and the Education Quality and Accountability Office (EQAO).

The AFO is committed to 7 priority issues. For each issue, the AFO has made recommendations to achieve its vision.

VISION 2025 – Building Our Future Together is French Ontario’s community strategic plan for the next 10 years.

The AFO is working on various projects to promote the Francophonie in Ontario and ensure the vitality of the Franco-Ontarian community.